Today we are kicking off with our first interview on The Music Regime (there are more to come, so turn the music on and get excited!)
I am very pleased to introduce the talented artist Naomi Roberts, who.... well, read and you'll find out! So get yourself a big nice cup of tea/coffee/moloko/butterbeer and meet our guest!


The Music Regime: Firstly, what prompted the connection between your artwork and music? Are you a music fan yourself?

Naomi: I am a huge music fan; although am sadly not musical myself! I think my music inspired canvases are my way of trying to be involved in music and the live music experience in some way. I love how intense music can be and how someone you will probably never meet can make you feel such heightened emotion. I’m trying my hardest to capture the emotion of live music performances & songs on a canvas. At the moment I don’t seem to be able to separate my two big loves of music and art, one always seems to influence the other. When I’m not working on pieces that feature musicians then I am experimenting with type and lyrics and always try to include these in my work. Lyrics heavily influence me and they have played a big part in my playing card canvases, both in the initial idea for the piece and also often in the collage that I add at the end. 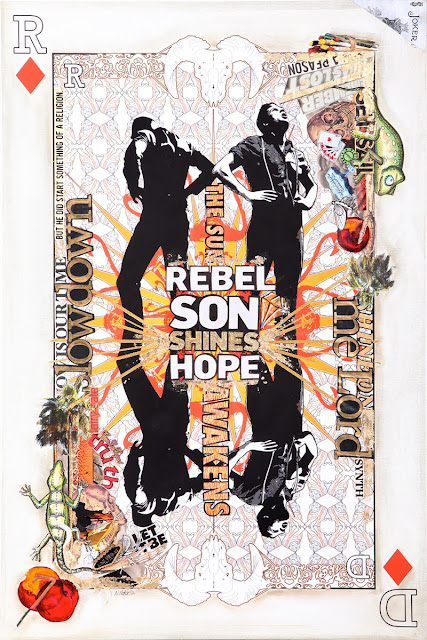 TMR:  Your designs strike me as very bright, bold and rebellious (hence the name of your brand I guess!). What is your favourite technique/medium to work in?


Naomi: I’m glad you think they are rebellious! I love the unpredictability of live music. You can tell when you are watching / listening to something special and that is what inspires me to produce these canvases. The Playing Card Series use digital art / drawing, pen, gold leaf and collage to convey the emotion of live music performances. My first piece was of Kingsley Chapman from the band The Chapman Family. He gave such an intense and vital performance at a festival I saw them play at, I hope that in someway I managed to capture this... With the playing card series I gave myself rules to follow – colour schemes and layout constrictions as I wanted them to look like they were part of a set. The digital art is controlled and ordered with detailed patterns in the playing card background which take inspiration from the performer the canvas is based around. The collage lets the playing card take a different shape and allows for more spontaneity. Collage material is sourced but much of it comes from random findings – an important aspect in my playing cards is the element of fate that lets them finally take shape. It is only when the collage is starting to be added to the canvas that it begins to take on its own character and words and phrases begin to gel and take on another meaning and another context. It is with careful placement that the final composition is completed. I love working with gold leaf – sometimes it can be hard not to get carried away with using it! The gold leaf is the finishing touch, it adds another dimension the playing cards – that untouchable glamour that rock and roll sells. It catches the light and is both beautiful and distressed, adding a subtle allure and aged element to the pieces. I want the pieces to be bold and vibrant but somehow a bit weary and weatherworn – I try to achieve this from the collage and gold leaf. I am currently learning to screen print and hope that this will add another dimension to the pieces. 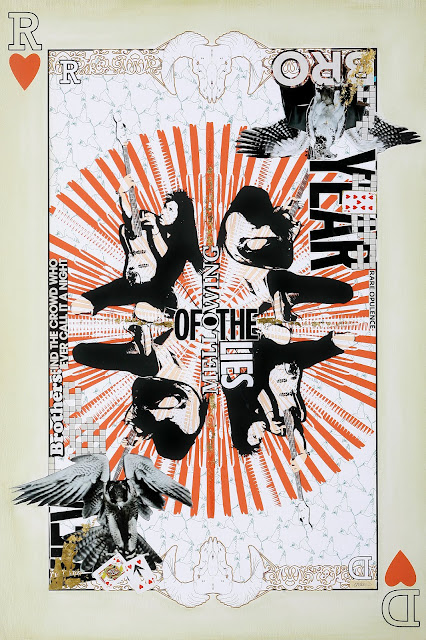 TMR:  Tell us a little about The Playing Card series you've produced. I know you've had commissions from well-known bands: who have you worked with?


Naomi: As far as commissions go – I have not yet been commissioned by a band; although I would love to be. My commission came from Eden Project in Cornwall. They hold large concerts in the Summer and I was commissioned to do two pieces for their last gig of the Summer last year. One was for The Mystery Jets and one was for Brandon Flowers (from The Killers). Eden then sold limited edition prints after the concert. I met The Mystery Jets at the gig, who were lovely and said they liked their piece. The Killers have been a massive influence on me and my name Rebel Diamond comes from a Killers song (Read My Mind “...the stars are blazing like rebel diamonds cut out of the sun...”). I sadly didn’t get to meet Brandon Flowers on the day, the occasion just never came about – which is a huge regret of mine. I would have loved to have known what he thought of the piece and not knowing plays on my mind all the time... I think everyone at some point wants affirmation. It doesn’t always come from where you hope though... I was fortunate enough that the actress and singer Juliette Lewis found out about the canvas of her (Queen of Spades) and she contacted me for a print. I think its great that she liked it enough to want one. She is a great performer and puts 100% into her gigs – I really admire this in artists / bands and I always try to convey this my playing cards.

TMR:  Is there anything else that inspires you to produce art except music?


Naomi: Music is my main influence at the moment, especially lyrics. For as long as I can remember I have always read the lyrics in the CD inlays and record sleeves. I remember reading all the lyrics to The Beatles songs on my dads record sleeves when I was little and ‘Across The Universe’ is one of my favourites lyrically. I love words – I am always scribbling down sentences that I think are witty or powerful or quotes that people say that mean something to me. I guess lyrics have always been something that stay with me most because they have the added impact of the instruments, vocals etc behind them. I like language and words and think they can be so powerful. But to me nothing quite beats some marvellous lyrics set to a powerful piece of music. 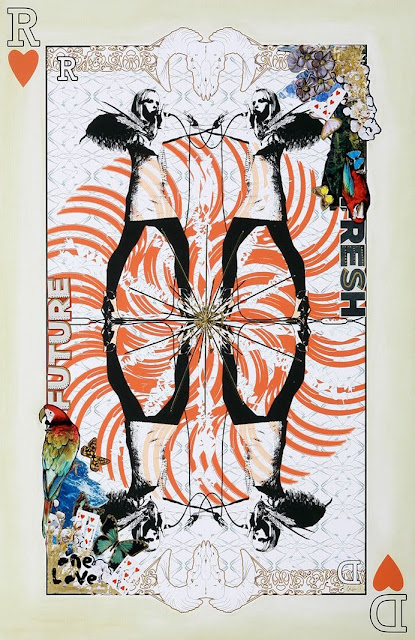 TMR:  What are you working on at the moment and where can we see your work?

Naomi: At the moment I am beginning to start work on my next series of canvases – hopefully using screen printing too. I am still really enjoy the playing card theme but I’m going to try and combine them with star signs so for example the musicians / singers will morph into a bull for Taurus and be in particular stances (drawing back a bow & arrow for Sagittarius etc. I have a few people in mind that I would like to feature in them. One of them being Eric Nally from Foxy Shazam – who has to be one of the most exciting live performers I have ever seen. To capture his spirit on a canvas would be amazing! At the moment I have a series of limited edition prints hanging in Black Wookie Recording Studios in Lancing and I’m hoping to exhibit at this years Brighton Festival – hopefully I’ll get a taker from the Open Houses Network! But visitors are always welcome at the unit where I am based Mon – Fri. Just drop me an email! Thank you!

TMR: Thanks, Naomi and good luck with your future projects!
Posted by The Music Regime at 09:03